Could you live without flying? Or could you travel just to local destinations within your region? Meet people who choose flight-free travel, micro tourism, or staycation. 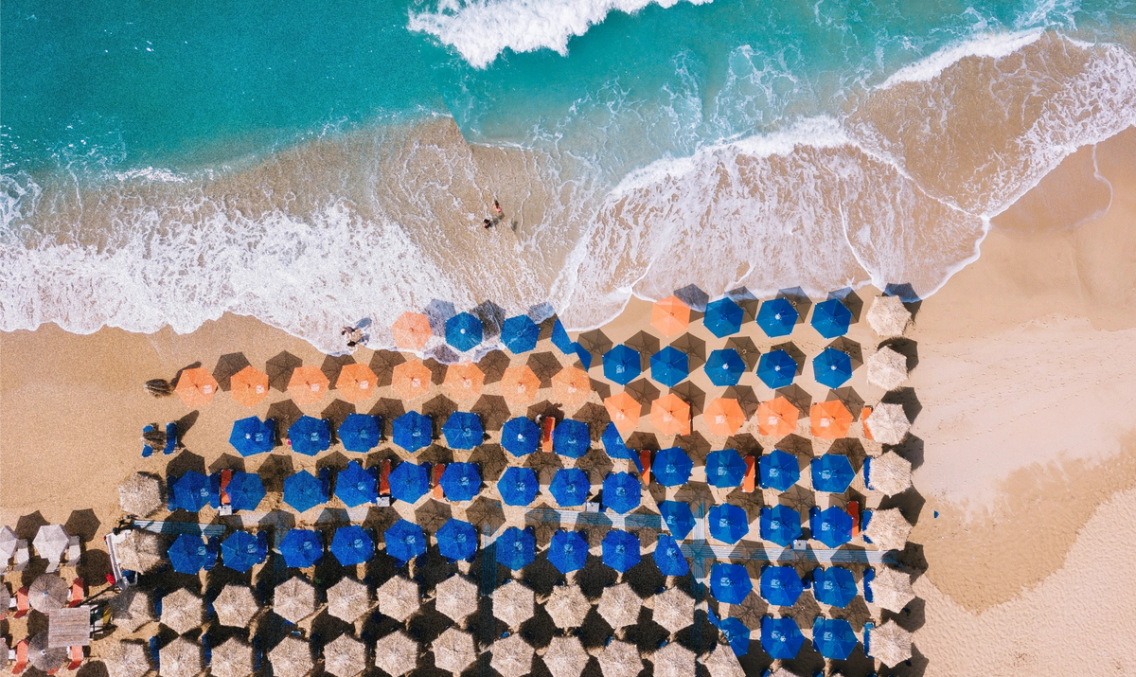 Anna Hughes gave up flying 12 years ago to reduce her carbon footprint. But she hasn’t given up traveling – this year she’s taking the train on vacation to Italy.

Alastair Humphreys had visited 60 countries and traveled 74 thousand kilometers, mostly by bicycle. After returning to his native country, the UK, he began to popularize “microadventures”. Sometimes he spends only one night in a tent an hour from London, sometimes he swims in the Thames for two days.

Milan Jones and his girlfriend Catherine Wilson decided last year to trade a trip to the Maldives for a week in their home state of Georgia, where they relaxed at the local spa resort and took day trips to natural areas and museums.

And Oncarbon's CEO and co-founder, Jussi Ahola, took a train trip from Tampere, Finland, to Bologna, Italy, covering 2727 km by rail and ferry. You can watch his adventure in this video.

These examples represent new travel trends that are growing in popularity: flightless travel, micro-tourism and staycations. And while a world without flying would complicate some things, it could also open the door for big changes in other, more rewarding modes of transportation.

The flight-free movement is usually associated with Swedish activist Greta Thunberg, who popularized flygskam – flight shame – in 2019. She let the whole world watch her train ride to the World Economic Forum in Davos, Switzerland, while other guests flew in 1,500 private jets. Later, she sailed across the Atlantic to the UN Climate Action Summit in New York.

Her example led to an 8% drop in the number of air passengers at Sweden’s ten busiest airports and an increase in rail travel1. This trend continued in 2020 and 2021, mainly due to the COVID-19 pandemic, which led to significant restrictions on air travel worldwide. Flights were canceled (resulting in 54% less CO2 emissions2), and people didn’t want to face the constant feeling of uncertainty about what would happen if they got sick abroad. 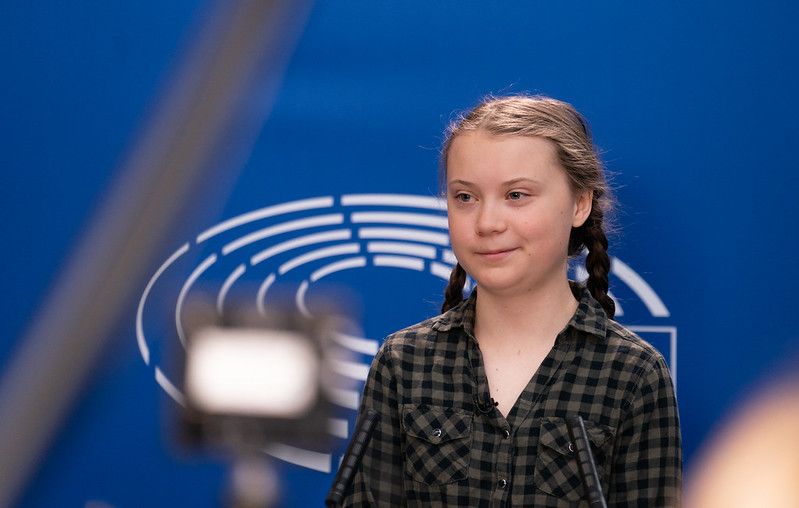 But in reality, the no-fly movement has been around for much longer. British politician Siân Berry, the co-leader of Green Party of England and Wales, didn’t board the plane between 2005-2019 and urged people not to take more than one flight a year. Paul Chatterton, professor of urban futures at the University of Leeds, also hasn’t flown since 2004, and Anna Hughes, founder of Flight Free UK, took her last flight in 2009.

“My decision was prompted by environmental concerns. It was a personal decision, but then I thought I’d share it with other people and encourage them to do the same. I was inspired by a Swedish flight-free group and created a community of people who pledged to change their behavior and fly less.” Anna Hughes

Up till now, over 10,000 people have taken a pledge to limit their flight travels with Flight Free UK. Many of them openly speak about how they feel about traveling in a different way. They also share their concerns. “I have a son who is 12 years old. That makes me think about the future. My dad is 92 years old. My son will be 92 in 2100 if he is lucky enough to live that long. What kind of world will his generation have to deal with? And what about his children, if he has them? I want to be a good ancestor, not just a good parent,” wrote Maggie Robertson of Bristol some time ago.

“I always encourage people to not fly for a year and see what it does for them. The most important thing is not to see it as a ‘sacrifice’ but as a benefit – for the environment and for the traveler – because flight-free travel is enriching and a more enjoyable travel experience.” Anna Hughes

The data seem to confirm their opinion. In a recent survey conducted by Oncarbon, 78% of respondents said they thought sustainable travel was important, and 54% cited taking a train instead of a flight as a decision they would make to travel in a more sustainable way. More than 30% have actually chosen trains over planes on their most recent trips, and 62% would be willing to make greener travel choices even if it was less convenient for them.

“By radically cutting down flying, we’re not going back to the dark ages; we’re going back to when people holidayed locally. It will be less of a sacrifice for a lot of people than we expect,” said Aled Jones, director of the Global Sustainability Institute at Anglia Ruskin University, in an interview with The Guardian. 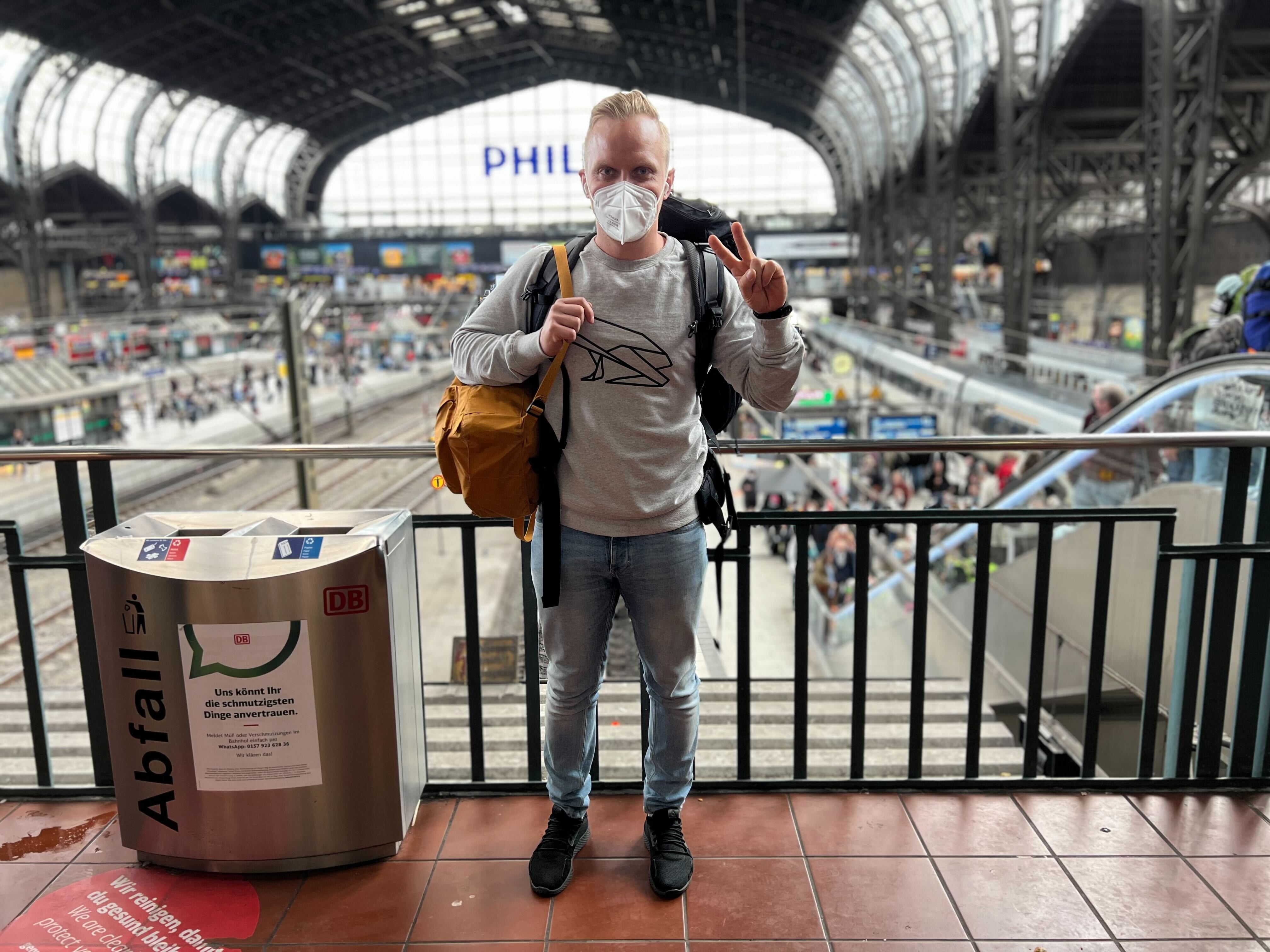 Oncarbon CEO and Co-Founder, Jussi Ahola, on his train trip across Europe, June 2022.

If “local travel” does not sound appealing enough, how about “microadventures”? A trend that gained popularity during the pandemic had actually been around for years, and one of its evangelists was Alastair Humphreys. As he puts it, a microadventure is “an adventure that is short, simple, local and cheap – yet fun, exciting, challenging, refreshing and rewarding.” Humphreys encourages people to pack a small backpack, hop on a bus or train and head to a place that’s at least a little wild.

“Even if I live in London, I can be in a place in an hour where there’s no human trail,” Humphreys says.

“Adventure means enthusiasm, ambition, open-mindedness and curiosity. If that’s true, then ’adventure’ does not just mean crossing deserts and climbing mountains; adventure can be found anywhere, every day, and it’s up to us to seek it out.” Alastair Humphreys

His concept of 5-9 adventures has found thousands of followers who spend nights outdoors and return to work the next day to discover the beauty of the surrounding places. While not born of environmental concerns, the trend has been hailed as a cheap, easy way to a quick boost of reorientation, reordering of priorities, refreshing gratitude, serenity and happiness. 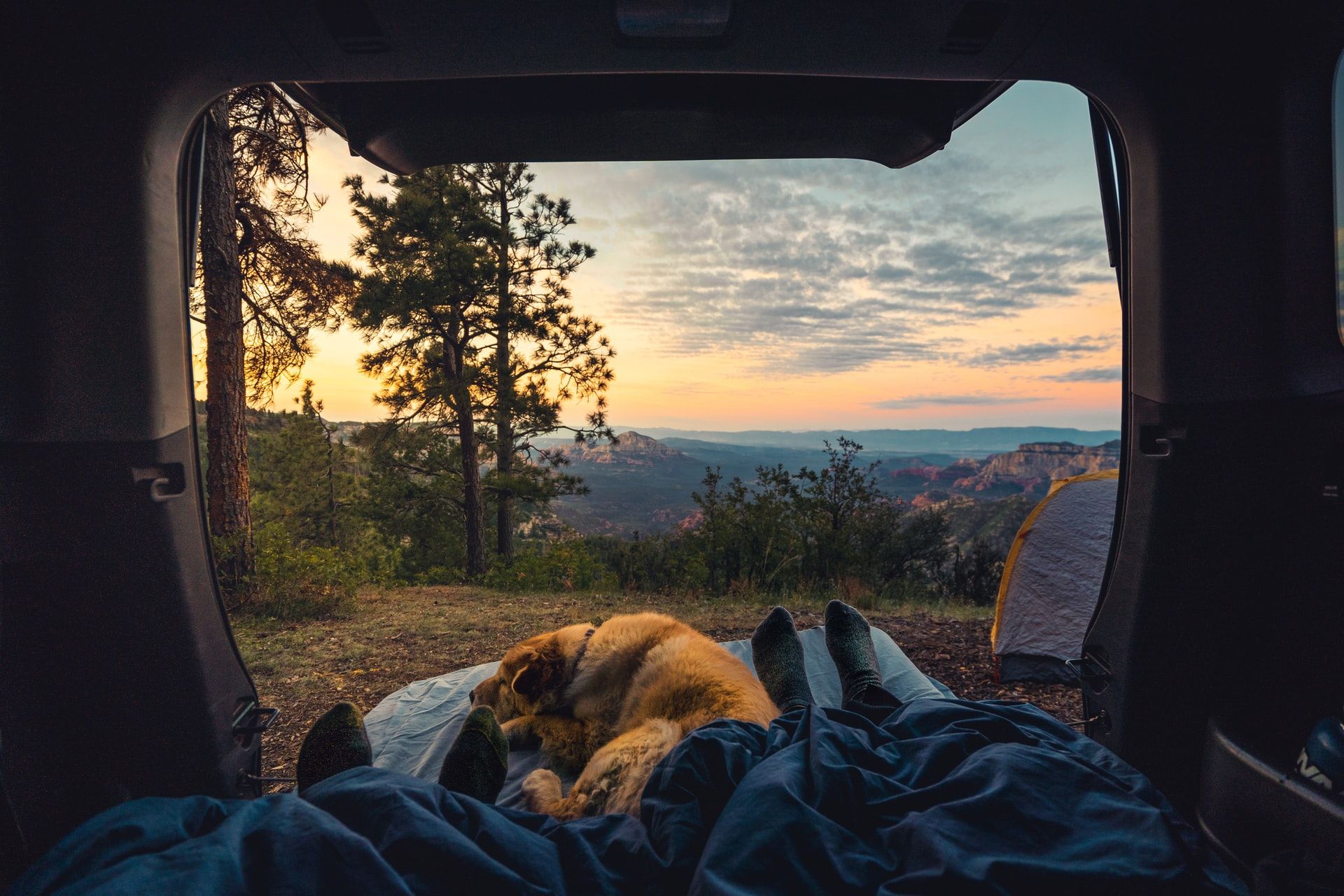 Microadventure assumes that adventure is everywhere – even an hour by train from the place you live.

Another form of micro-tourism is staycationing, which has been forced in recent years in part by the pandemic and rising prices. Many people were discouraged by canceled flights, COVID-19 restrictions, and uncertainty about refund policies, and decided to spend their vacations closer to home. The results? According to a recent study by Bankrate, 69% of American adults who say they will take a vacation this summer plan to make changes to their plans due to inflation, with 25% taking shorter trips and 23% planning less expensive activities.4

Among those planning to take time off, vacations are the second most popular option after going to the beach. Travel agents in the U.S. also acknowledge that demand for domestic travel is high and some hotels are beginning to offer discounted rates for locals.

Milan Jones and his girlfriend Catherine Wilson are among them. In 2020 and 2021, the couple made do with day trips to nature spots, museums and spas near their Georgia home. This spring, they planned to travel to the Maldives, but instead of a one-day (and climate-damaging) flight to the other side of the world, they opted for a local spa resort.

Travel by rail on the rise

All these trends are basically nothing new – it’s just that we used to perceive flying as a normal part of a mobile lifestyle rather than something luxurious and exclusive (as in the 1950s and 60s). Today, more and more people see flying as linked to climate change – and therefore choose to take the train, stay at home, or travel “slowly”.

The market has responded to these needs – tour operators are adding rail travel to their offerings or eliminating flights altogether. Cat Jones, who founded Byway, a flight-free travel agency, in March 2020, said her company has been overwhelmed with interest as people seek crowds-free destinations and flight-free options. Exodus Travels announced it would include rail travel on 18 of its escorted trips from the U.K. to meet its science-based climate goal of halving its carbon footprint per passenger by 2030, and Intrepid Travels aims to eliminate all flights under 90 minutes from its top 50 trips by the end of 2022, if possible.

Another example of a company looking to build its business on rail travel is the French startup Midnight Trains, which plans to offer luxury night trains starting in 2024. The network will include 10 destinations, each between 800 and 1,500 km from Paris. The founders of Midnight Trains want their concept to create “a train, a hotel, a restaurant, and an app” that will connect Europe and provide a low-carbon, comfortable journey without the hassle of the airport.

If we all stopped flying, CO2 emissions would drop by 2.5%. We’d be rid of the earth-heating contrails and noise pollution near airports. Countries whose residents spend more abroad than tourists visiting the country would benefit. But countries, especially islands, that are completely dependent on tourism would suffer. The same goes for 11 million people employed in the aviation industry worldwide and another 18 million people working in companies indirectly supported by aviation, such as fuel suppliers and call centers.

We recognize that this scenario is not possible – and it is not our intention to demand anyone to give up flying entirely. Rather, it is to highlight other options and opportunities that can be more rewarding than quick city trips. Traveling slowly, enjoying the journey and the distance, could help us relax better and help the environment at the same time.

A 600 km train journey “costs” about 3.36 kg of CO2 per passenger, while the same distance in an airplane involves a carbon footprint of about 90 kg of CO2 per seat (data from RailEurope.com). The difference is significant, but at the same time most of us are not aware of it, as communication of emissions is still rare in the travel industry.

This is why we, as Oncarbon, are campaigning for more transparency in the travel industry. We believe that as passengers and customers, you have the right to know about the climate costs of your travel and make informed decisions. Our research shows that 2/3 of travelers would like to receive environmental information at the time of ticket purchase – and we are committed to making that happen. If you’d like to learn more about our mission and the way we work, give us a call and see how Oncarbon can help your travel business in helping people who want to make more conscious travel decisions. 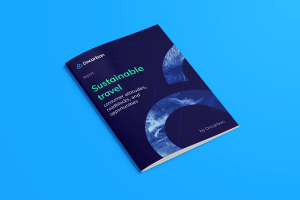 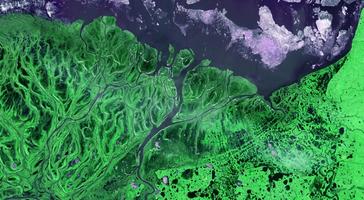 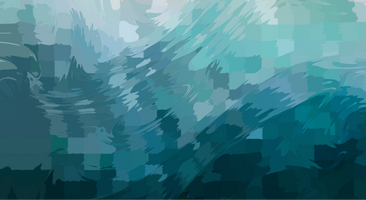 knowledge
Does flying economy reduce the carbon footprint of your flight?
June 2, 2022